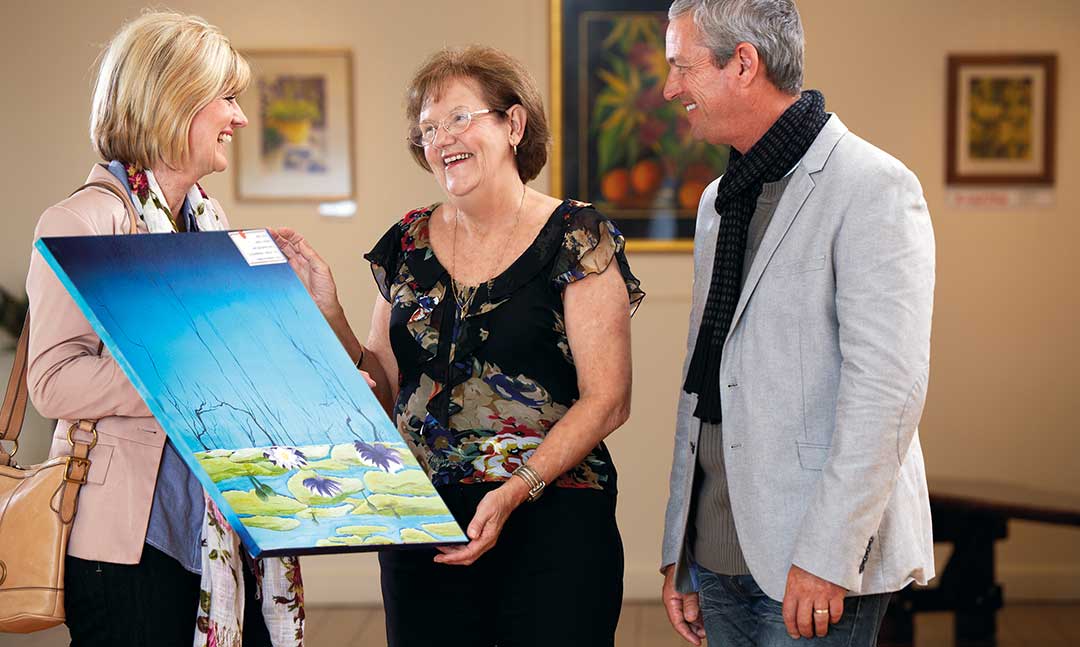 The Wondai Regional Art Gallery is recognised as one of the best galleries in rural South East Queensland. It plays an important part in the region’s cultural life and development as well as contributing significantly to the South Burnett’s tourism industry. The gallery is housed in the original Wondai Station Master’s House. Click here to see details about our current exhibition.

The gallery provides opportunities for people to develop and display their artistic skills as well as showcasing the region’s art and culture to the visiting public, bringing long term benefits to individuals and the community at large.

To keep up to date with the latest gallery news visit us on facebook. 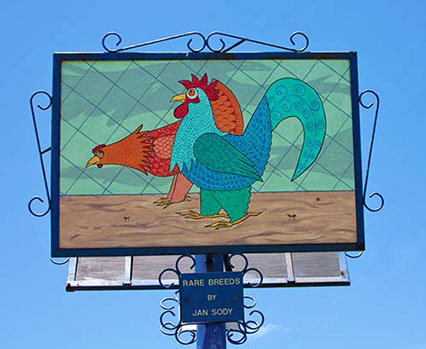 The National Gallery, Canberra, has the original ‘Blue Poles’ painted by Jackson Pollock but the South Burnett has 14 of its own blue poles, each adorned with two artworks. This unique way of taking art to the people and ‘the pole’ are a real talking point for visitors, with many a photograph taken next to one of them. Every two years the paintings are taken down and auctioned and new artworks take their place.

Exhibiting artists with work displayed in the Wondai Regional Art Gallery are invited to produce paintings using just four basic outside house paint colours on donated boards. These painting are attached to the 14 poles situation throughout the shire. Nine of the poles are located in Wondai, one in Tingoora, two in Proston and two in Murgon. Beginning in February of 2003 by Alison Izlaub, the latest update of the pole’s artwork took place in early 2018.

PROSTON
Pole near the Hall
“The Lakes” by Trish Erkens, and “A Helping Hands” by Daphne Browne
Near Boondooma Lake turn off
“Walk Amoung The Gum Trees” by Kathleen Stevens, and “Lake Boondooma” by Patricia Dellar-Smith

WONDAI
Dr Lip Surgery Brampston Street
“It’s Time To Call It A Day” by Marie Routledge and “Bunyas in My Back Yard” by Glenn Kelly
At the bus stop in McKenzie Street near toilets
“Pigs & Peanuts” by Lesley Fewtrell and “Beauty That Surrounds Us” by Peter Salmon
Coronation Park near the Emu
“The Show-Off” by Jan Sody and “Flowing Wattle” by Faye Cooke
Corner of Scott & McKenzie Street near Library
“A Barn With A View – Corndale” by Darryl Jones and “Field of Poppies” by Roza Lear
Scott Street near Rail Trail and Wondai Sign
“Bella” by Robyn Dower and “Just Rosie” by Graham Mitchell
Roundabout Near Gallery
“The Homestead” by Margie Zimmermann, and “The Colourful Characters of Wondai” by Cartia Longden
On the path to the VIC Corner of Scott and Haly Streets
“The Forgotten Project” by Marie Evans, and “Make Hay While the Sun Shines” by Joy Baker
Near the Timber Museum
“Wood Museum” by Patricia Dellar-Smith, and “A Tribute To Gustav Klimt” by Angela Palmer
Dingo Park near Driver Reviver
“Local Produce” by Patricia Dellar-Smith, and “My Heritage- Red” by Sue Baker

SEND US A MESSAGE